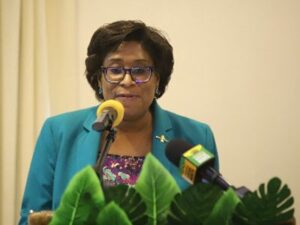 Kaieteur News – The Ethnic Relations Commission (ERC) has cleared A Partnership for National Unity +Alliance For Change (APNU+AFC) Member of Parliament (MP) Cathy Hughes of allegations of racial incitement.
Hughes had been accused of making some racially charged statements on Facebook last December following an altercation between relatives of the slain Henry cousins and police ranks. A screenshot of a comment supposedly made by the APNU+AFC MP prompted an investigation by the ERC.
A summary of the comments read “Why, Why, Why. Has this family not had more than most can bear? Madness” to which someone responded, “It seems to me as though someone wants a civil war in this country, our people are being too quiet and these people need attention”. The image then showed Hughes supposedly responding to the comment saying “This country needs a civil war”.
After the image was circulated, the ERC released a statement stating that they have expeditiously started an investigation into the comment that was “calling for an undesirable and dangerous action which can potentially impact negatively on ethnic relations”.
Hughes had however denied making the comment, saying that it was “fraudulent” and “wholly untrue”.
Yesterday, the ERC issued a letter of apology to Hughes explaining to her that she had been cleared of the allegations. The Commission however that it was liable to launch the investigations since such comments whether true or false could not be taken lightly.
In the letter to Hughes, the ERC explained that given its mandate, the Commission has to receive and investigate complaints of racial, ethnic, religious and cultural discrimination brought to its attention.
The ERC noted nonetheless that the team has concluded that the comment “this country needs a civil war” was intended to create nothing more than mischief in the Guyanese populace.
In that regard, the Commission noted that it recognizes that the source and identity of the individual(s) connected to the comment made.
As such, the Commission said it will be forwarding its findings to the Cybercrime Unit of the police for necessary action.
At the interim, the Commission took the opportunity to apologise to Hughes for any public ridicule which was made and expressed its willingness to render any further assistance, which it deems necessary in assisting with the investigation.